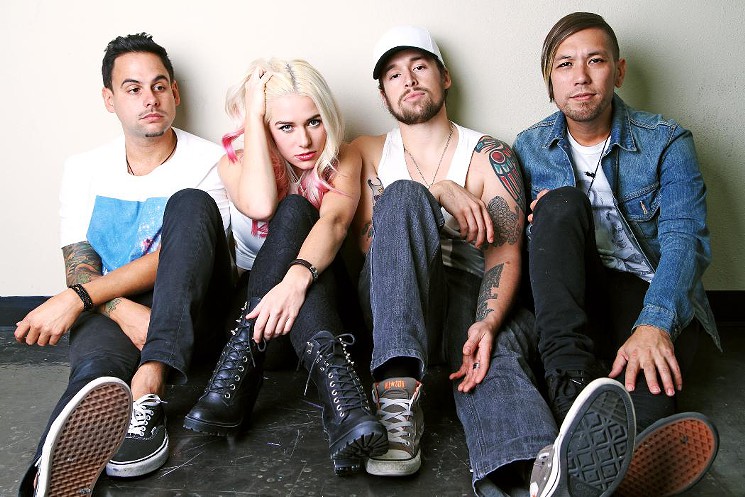 Lauren Mulderrig shrugs and looks over at Chris Hori, who’s sitting in front of his drum kit. The Aloha Radio singer is used to being the center of attention while on stage, but usually not while she and her bandmates are chilling in their small Santa Ana practice space.

“I think it’s one part reggae, one part hip-hop, a little bit of surf, and some ice cold Corona,” Mulderrig says of the “SoCal sound” the band boasts. “It’s kind of an attitude.”

What the blonde frontwoman means is that OC’s sound has never had a shortage of reggae influence, but everyone who’s successful has taken it their own way.

From No Doubt and Sublime to the Offspring and Dirty Heads to that one band that your friend always drags you to see in the dive bars of Huntington Beach, generations of reggae-rock bands have always called the area home well before they hit it big.

“To me, it’s not just reggae,” Hori says. “It’s all those bands from Southern California. It’s shifting to where it’s more of a lifestyle.”

Aloha Radio may very well be the next name on that list of “SoCal” bands to make it big, as the quartet continues to make strides in separating themselves from the pack of OC’s young beach bands. The next step in that journey happens this Saturday when the group opens up the One Love Cali Reggae Fest at the Observatory in Santa Ana.

“If our first show was opening this festival, we would not have been ready,” Mulderrig says. “When we were grinding it out in the bar scene, it was rough at times, but it taught us so much about playing and performing. We’re really grateful to be in a position where we can be part of this lineup, and it’s nice to see reggae and the SoCal sound get a festival alongside Beach Goth and festivals like that.”

“It’s a game-changer for us,” Hori adds. “Being rooted in Southern California and getting this first opportunity to be in the first installment of this large reggae fest in our hometown, I would’ve been bummed if we didn’t get on it.”

Of course, it’s easy to point out one of the things that helps Aloha Radio stand out in OC, as their spunky singer looks and sounds very different from the typical tank top-wearing bros that dominate the scene.

But it’s not just Mulderrig pushing the four piece ahead of the pack, it’s also their dedication and amount of music they release. They put out two new albums last summer, and they’re already working on the next.

“We just keep releasing everything that we can,” says Alex Barnett, Aloha Radio’s guitarist. “Nowadays, everybody binge-watches everything. They binge-listen to everything, so we just have to keep putting stuff out. I like it because it keeps us on our toes and keeps the sound evolving and changing.”

It might seem like a big undertaking for a handful of OC kids to be putting out new music on about a monthly basis, but it’s both a career and a passion for the Aloha Radio crew. Their organically “SoCal” brand of music fuses everything from reggae and rock to rap and electronica, or everything that LA, OC, and San Diego has been known for in the music world over the last few decades. In other words, it’s everything they love and want to do musically.

“I don’t know if it’s intentional, I think we just all have such eclectic taste that it’s hard to always play reggae,” Mulderrig says. “Being brought up in this area with Sublime, No Doubt, you can’t help but be influenced by that sound. Right now, we’re really influenced by a lot of electronic bands, so we’ve been incorporating that more into our sound.”

“It’s almost like we all find our center in the music,” says bassist Andrew Russell. “We’re all coming together, and the music is what happens.”

As for the future, playing with bands like Rebelution and Iration at the One Love Cali Reggae Festival is awesome, but Aloha Radio has slightly different long-term goals.

“Muse just did the round [stage setup] on their last tour, so I think that’s a good long-term goal,” Hori says. “If you started in any creative career for the money, that’s foolish because there’s such a small percentage of people who really make money doing it.”

Although Mulderrig agrees, there’s still something to be said for having modest financial short-term goals. “More short term, we’d like to be able to pay rent.” (Josh Chesler)