OC Weekly Feature: Aloha Radio Bring About a Golden State of Mind on Their Latest Record 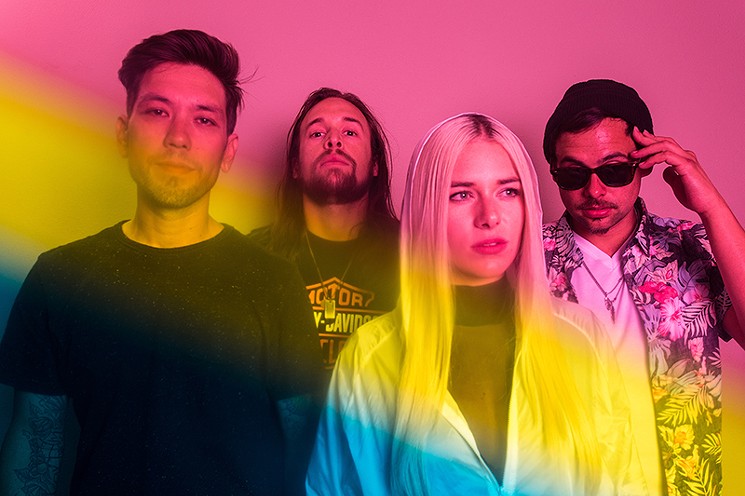 OC’s catchiest reggae rockers are back.

With the release of Golden State of Mind, local reggae-rock band Aloha Radio has put on display just how much they’ve grown over the last 18 months. Their latest record still contains the group’s signature upbeat poppy tunes behind Lauren Mulderrig’s catchy vocals, but Golden State of Mind also brings layers of depth and complexity that make it appropriate for more than just an extended smoke session or cheap beer-fueled party.

“It’s a journey of self-discovery,” Mulderrig says. “It’s about staying positive even when things get rough. We’ve got some party anthems on there — because who doesn’t love to party — but there are also some other deeper meanings in the record like self-empowerment and a message of unity.”

“When we released ‘Break the Ceiling’ a year and a half ago, we thought we’d found our sound,” adds drummer Chris Hori. “We thought we’d put that song out, finish the record, and tour. Then we had discussions within the band about songwriting things, vocal things, musical things, drum things — there were just so many things we wanted to have better.”

One way in which Aloha Radio helped themselves was by doing just a little bit less. Rather than handling all of the recording and production like they had on previous records, the quartet got some professional assistance with the technical side of things for Golden State of Mind. That way, the band could just focus on putting together the best tracks possible while Mulderrig and guitarist Alex Barnett co-wrote what are clearly the strongest lyrics they’ve ever recorded.

“The interesting thing about this record is that these songs all seemed to come in batches of three,” Mulderrig says. “We kept writing between the batches, but the ones that stuck seemed to be three at a time. Those three always seemed to have a similar message or a similar feel, so it was kind of interesting how it all came together.”

But while not every song penned since the end of 2015 was good enough to end up on the record, Aloha Radio has never struggled to come up with new material. Whether they’re in the studio, a practice space, or on tour, the group is pretty much always writing. Even as they all continue to balance the unfortunate reality of maintaining day jobs while rocking out by moonlight, the next album is already coming together in its infant stages.

“Going back and forth from a band person to a regular dude is tough to do sometimes, because you might have a sold-out show for 1,000 people with a great headlining band one night and the day before you were the guy working a 9-to-5,” Hori says. “Having a one-off show when we’ve been rehearsing a lot is real quick, but it’s the deep tastes that kill me. When we go out for a week and see that we would belong there, that’s when it’s tougher. We get it and we understand it, but we just need our opportunity.”

Along with their latest release, Aloha Radio hopes that the band’s first big national tour in support of Pepper and Tribal Seeds this fall will help them make that jump into the next level. After all, no matter how good they sound on record, Mulderrig and the rest of the group know that the party-like atmosphere of their live performances is ultimately what will stay in people’s minds for years to come.

“There were times when we were in limbo, and it was stressful,” Mulderrig says. “With not playing as many shows and focusing on the songwriting, it started to get to the point where I was like ‘I want to play a show! I want to see people again! I’m tired of being locked up in the studio!’ Our favorite part is playing lots of shows, so that’s always what we want to do.

“We’re definitely more confident as performers now,” Mulderrig continues. “I love performing, but I have a lot to do in that area. I want to bring so much more energy to the crowd. My goal is to be the life of the party every time.” (Josh Chesler)